Drop by to share tea and sweets from a different culture each week and chat about any and everything. Tea is the medium for a ritual that is practiced daily around the world. Though the ritual may vary, tea carves out time and space for hospitality, tradition and mediation. Come share with us.

This week's theme is attaya, small bites and traditions from Senegal hosted by Samba Dioum. Samba is a musician from Dakar, Senegal. He makes tea in the Senegalese tradition as he learned from his family.

This week, Fabian Cerejido hosts with the theme of yerba maté. Fabian is an artist, teacher, and writer. His video installations and drawings conjure up fictional trips in milk and ritualized activities of daily life. He has lived in Buenos Aires, Mexico City, and New York City, and in California since 2004.

This week's theme will be small bites from Yemen, hosted by Sumaya and Shada Abubaker. Sumaya and Shada grew up with their older sister in California's Central Valley. They lived and learned the tradition of tea from their mother and family visits to Yemen.

The spotlight will be on India's tea traditions this week, hosted by Lilly Eluvathingal, PhD. Lilly grew up in South India drinking a lot of tea, but as a child she never gave it a second thought. Her research in graduate school gave her the opportunity to spend four years living on tea plantations in South India.

This week will be hosted by Charlotte Nguyen. The session will begin with a brief introduction to Tea Ceremony, followed by sacred silence and the sharing of Tea. When the group is ready, we will release our silence and dive into conversation and see where the Tea guides us.

This week's theme is ponché, small bites and holiday traditions from México, hosted by Justino Mora. Justino is a digital strategist, software engineer, and immigrant rights activist. He is deeply passionate about the intersection of tech, activism, and media, and is currently a Senior Fellow at the USC Annenberg Innovation Lab.

Tea Afar is produced by April Banks, a Los Angeles based conceptual artist and traveler. For over a decade Banks made art that raised awareness and pointed to the global disparity in food security, farmer’s rights and fair trade. Tea Afar, a nomadic storytelling experience, was conceived as a salve — bringing us together across borders — for all the divisiveness and exploitation that is propagated by a global trade economy. Visit www.teaafar.com for more information on April's project. 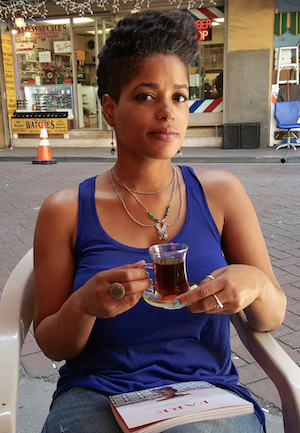