Drop by OXY ARTS from May 23 - May 25 to view untitled (la revolución es la solución!) by artist Kang Seung Lee. This piece is part of an outdoor public art exhibition, organized and curated by Warren Neidich, Renée Petropoulos, Anuradha Vikram, that is experienced from the safety and intimacy of one's own automobile.

Originally commissioned by Artpace San Antonio, untitled (la revolución es la solución!) 2017, was made in commemoration of the 25th anniversary of the Los Angeles Uprising (1992). The neon was traced from graffiti produced during the uprising. ⁣
⁣
I am particularly interested in the fact that the uprising, commonly understood as a white-black conflict, was also a boiling point for tensions in the Latino and Asian communities. The residents of disadvantaged and marginalized, mostly working/merchant class neighborhoods, Koreatown and South Central in Los Angeles, didn’t have much access outside of this affordable area and the uprising became a cataclysm of growing discontent among them.⁣⁣

The graffiti proclaimed on the lone wall standing after flames gutted during the uprising calls up alternative readings and meanings of the resistance. A neon piece traced from the graffiti ... is created as an invitation to a hopeful future with imaginative possibilities that may not come in the form we already know. -Exhibition text from Artpace San Antonio⁣ 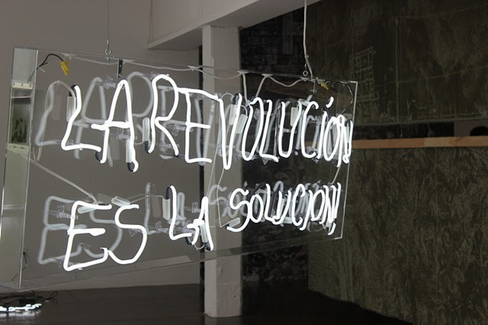