Malaquias Montoya: A Voice for the Voiceless: In Conversation

Malaquias Montoya is a legendary artist whose work is socio-political. This panel will touch on topics such as Malaquias' role in the Chicano art movement overall, the issues he is dealing with through his art, and how his art relates to the Chicano Art Movement here in LA.

Malaquias Montoya was born in Albuquerque, New Mexico and raised in the San Joaquin Valley of California. His works include acrylic paintings, murals, washes, and drawings, but he is primarily known for his silkscreen prints, which have been exhibited internationally as well as nationally. He is credited by historians as one of the founders of the social serigraphy movement in the San Francisco Bay Area in the mid-1960's. Montoya's unique visual expression is an art of protest, depicting the resistance and strength of humanity in the face of injustice and the necessity to unite behind that struggle. He has lectured and taught at numerous colleges and universities in the San Francisco Bay Area including Stanford and the University of California, Berkeley. He was a Professor at the California College of Arts and Crafts in Oakland, CA for twelve years; for five of those years he was Chair of the Ethnic Studies Department as well. During this period he also served as Director of the Taller de Artes Graficas, in East Oakland, where he produced various prints and conducted many community art workshops. Since 1989 Montoya has held a professorship at the University of California, Davis, teaching both in the department of Art and the department of Chicana/o Studies. In 2000, he spent a semester as Visiting Professor in the Art Department at the University of Notre Dame, in Indiana, and he currently holds the title of Visiting Fellow in the Institute for Latino Studies at Notre Dame.

Betty Avila’s work has centered on the intersection of the arts and social justice, with particular focus on community building, public space, and youth empowerment. Betty joined the Self Help Graphics and Art leadership in 2015, an organization with a 44-year nationally-recognized artistic legacy of empowering the Chicano and Latino communities of Los Angeles through the arts.

Richard Montoya is a Filmmaker, Playwright, Actor and Co-creator of Culture Clash performance trio. An arts advocate and Social Justice practitioner on the nations regional stages. Montoya is the nephew of Malaquias and proud to have wormed his way on stage tonight!

Make sure to stop by Avenue 50 Studio to check out Malaquias Montoya's latest exhibition 'Along the Border/A lo Largo de la Frontera'. The exbition will be on view from from September 7, 2017 through October 9, 2017.

Click here for directions to Choi Auditorium at Occidental College 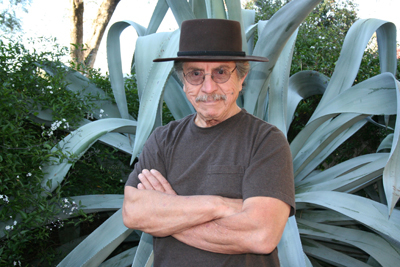