A Night of Cross-Cultural Solidarity and Movement Building

Join us for an evening of cross cultural solidarity, creativity and inspiration.

traci kato-kiriyama, a Los Angeles based, artist, writer and educator, skillfully and intuitively brings folks together in community and solidarity. They are a natural connector and collaborator.

With this nurturing force, and in connection with the collectivist spirit of the exhibition, traci convenes some of her dearest and most creative collaborators across Los Angeles for an evening of storytelling, poetry and conversation on the nature of community, activism and connection. Join us to hear from and experience the work of traci kato-kiriyama, Fe Montes, Sequoia Olivia Mercier, and Johneric Concordia.

The exhibition, Voice a Wild Dream, borrows its title from traci's poem “Letters to Taz - on meeting (after Taz Ahmed’s ‘If Our Grandparents Could Meet’),” included in her recent publication Navigating With(out) Instruments. In the poem, Traci imagines a shared moment between the two poet activists’ grandparents and the solidarity that they might share in their hope for the future. 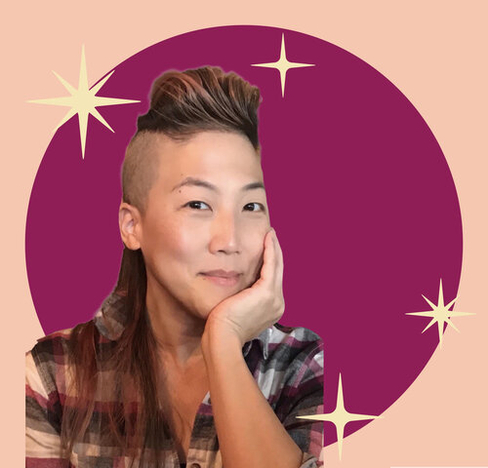 traci kato-kiriyama (they+she; based on unceded Tongva land in the south bay of Los Angeles) --author of Navigating With(out) Instruments-- is an award-winning multi-, inter- and transdisciplinary artist, recognized for their work as a writer/performer, theatre deviser, cultural producer, community organizer, and audiobook narrator. As a storyteller and Artivist, tkk is grounded in collaborative process, collective self-determination, and art+community as intrinsically tied and a critical means toward connection and healing. She is a performer & principal writer for PULLproject Ensemble, two-time NET recipient; NEFA 2021-22 awardee for their show TALES OF CLAMOR.  tkk —presented in hundreds of venues for over 25 years as a writer, actor, poet, speaker, guest lecturer, facilitator, Artist-in-Residence, and organizing / arts & culture consultant— has come to appreciate a wildly hybrid career (presenters incl. LaMaMa Cabaret; The Smithsonian; The Getty; Hammer Museum; Grand Performances; Whisky a Go Go; Hotel Cafe; House Of Blues Foundation Room; and countless universities, arts spaces, and community centers across the country).  Their work is also featured in a wide swath of media and print publications (incl. NPR; PBS; Elle.com; Entropy; Chapparal Canyon Press; Tia Chucha Press; Bamboo Ridge Press; Heyday Books; Regent Press). tkk is a core artist with Vigilant Love; founding member of the Okaeri Nikkei LGBTQ+ Network; a principal organizer of the National Nikkei Reparations Coalition and Nikkei Progressives/NCRR; and serves as the Director/Co-Founder of Tuesday Night Project - presenter of the Tuesday Night Cafe series, which will soon celebrate 25 years as the longest-running Asian American public arts series in the country.

Sequoia Olivia Mercier is a poet, community organizer/activist, mother, and masters prepared RN, Mental Health Facilitator. She is a member and former executive director of The World Stage Performance Gallery in Leimert Park, Los Angeles, and past co-chair of the Los Angeles Free South Africa Movement. She is the author of, Midnite Rainbow, 2005. Her work appears in several other publications, including: Go, Tell Michelle: African American Women Write to the New First Lady (Excelsior Editions), 2009; Voices from Leimert Park, 2006; Voices from Leimert Park: Redux, 2017; and  Angels in the Village, 2000. In 2021 her Story Portrait was on display in Leimert Park and the California African American Museum as part of a collaborative art project titled, Creating Our Next L.A., organized by LA Commons/We Rise. She was chosen by the California Pan-Ethnic Health Network(CPEHN) in 2021 to receive an award for her poetry, which appears in The Right to Heal zine.

Johneric Concordia is the Chef and Co-Founder of The Park’s Finest, a Los Angeles-based restaurant in Echo Park, Historic Filipinotown. In his youth, he participated in local non-profit programs and projects designed to prevent at-risk behavior and substance abuse and later engaged in various intergenerational community organizing efforts. With the assistance of SIPA and the Asian Pacific Islander Small Business Program, he started The Park’s Finest, a catering company, with local friends/family. The continued growing support of family and community allowed for the opening of The Park's Finest brick and mortar in 2012. A year later, the restaurant was featured on the “L.A. Eats” episode of The Food Network’s Diners, Drive-ins, and Dives. In 2017, Johneric hosted episodes of the Discovery Channel Asia’s “Prison Food”, a series that takes a chef into some of the world’s most notorious prisons to cook a meal behind bars, accompanied by volunteer kitchen staff who are inmates themselves. Since 2019, through a collaborative partnership, he serves as the Executive Chef of Thunderbolt, a new neighborhood restaurant offering Southern-inspired food and thoughtfully-crafted cocktails on Temple Street. During the pandemic, Johneric engaged with The Park’s Finest’s Feed the Frontliners Project daily operations feeding healthcare workers and fire station personnel throughout Los Angeles County. Next door, Thunderbolt has also executed a program offering free sponsored meals for out-of-work hospitality personnel.

Felicia ‘Fe’ Montes is a Xicana Indigenous artist, activist, community & event organizer, educator, emcee, designer, poet, performer, professor and practitioner of the healing arts living and working in indigenous Tongva land (Los Angeles). She is the founder of various autonomous cultural artivist projects including In Lak Ech, El MERCADO and La Botanica del Barrio and serves as the founding director of the women’s wellness and art organization, Mujeres de Maiz. For over 25 years she has worked on various transnational art and organizing efforts including work with the Zapatistas, Peace & Dignity Journeys and La Red Xicana Indigena. Montes graduated with a B.A. from UCLA in World Arts & Cultures with a minor in Chicana/o/x Studies, a M.A in Chicana/ox Studies from Cal State Northridge, and a M.F.A from Otis College of Art & Design in Public Practice Art.