Golestan Revisited is a project in process, questioning the collecting and cultivation of roses since the Crusades and their subsequent renaming, effectively erasing their history. The project concurrently researches the sources of common roses, while renaming the roses to honor women from Central, West Asia and North Africa who were killed in wars and militarized actions post 2010.

Roses are often associated with formal European gardens and rarified beauty. Less known is that many of these cultivars were imported to Europe during the violence of the Crusades by medieval royalty, then transplanted and hybridized. Popular plantings tended by rosarians in Western gardens draw their lineage from Rosa gallica, used for perfumes, teas, medicine and food in the geographic areas of Persia, Indus Valley and the Levant— known today as Afghanistan, Iran, Iraq, and Syria. Ancient Persian folklore tells the story of a nightingale who fell so in love with her white rose that she clutched its thorns and bled resulting in the deep color of the red damask, Rosa damascene.

The name Golestan translates from Farsi to mean land of the flowers and is the title of a seminal collection of poetry by the 13th Century Iranian poet Sa’adi. Drawing upon the metaphor of the rose, Golestan Revisited is a multicomponent project drawing on the image of the rose as a literal and symbolic captive and an entry point to contemporary facts of perpetual war, occupation, and resistance.

View photos from the exhibition opening reception on Flickr.

This exhibition is made possible with the generous support of The Andrew W. Mellon Foundation. 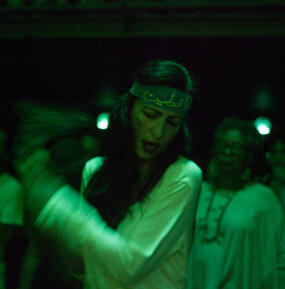 Amitis Motevalli is an artist born in Iran and moved to the US in 1977 pre-revolution. She explores the cultural resistance and survival of people living in poverty, conflict and war. Her experience as a working-class trans-national migrant, is foundational to her drive for creating art that contests popular beliefs about immigrants and diaspora.