"The inscrutable speech of objects"

"The inscrutable speech of objects" traces the materialist history of colonial goods, such as indigo, opium, sugar, porcelain, and tea. It looks at the entangled connections between these items and the racialized language around their dispersal and value.

Surrounding the installation are research materials, plant tinctures, natural specimens, drawings and a large-scale fragment of handmade paper created from boiling together the shredded plant matter of poppy stems, sugarcane, indigo, and yucca.

Each of the drawings records Lin’s experience after ingesting a plant tincture or flower essence and is an attempt to expand the idea of research to imagine what is missing from archives and books. Many of the plants included in the exhibition come from Lin’s research into poisons, abortifacients, medicines and drugs that were imbricated in the histories of slavery and coolie labor, or may have been used during slave and worker uprisings or for actions of resistance or healing.

The exhibition as a whole attempts “to imagine,” in the words of feminist literary scholar Saidiya Hartman, “what cannot be verified…to reckon with precarious lives which are only visible in the moment of their disappearance” —to think into being what noted theorist Lisa Lowe describes as “the matters absent, entangled and unavailable.” It does so through a recognition of the withdrawal, allure and opacity that certain materials contain, and activates these objects and histories into new orientations.

Ako Castuera’s exhibition, "Soil", is physically connected to Candice Lin’s by having, at various points during the show, the waste materials of Lin’s exhibition (food leftover from the reception, or plant matter used in the sculptures) recycled and fed to the worms living in Castuera’s ceramic worm composting sculpture. The worms will break the waste down into usable rich soil. A ceremonial offering of gratitude to the soil, the composter is conceived as a temple for worms, embodying the reciprocal exchange between gifts that are drawn out of the soil, such as clay and food, and the transformational return of decaying materials via earthworms. The composter bears references to Metzli, the aztec god and goddess of the moon. Also known as “the lowly god of worms” the worm temple reconsiders an event in which a rabbit is flung into Metzli’s face, forcing them to retreat in shame and take a subordinate role to the sun. The composter temple invites a worm and soil-centric shift in the telling of this story, in which the fall of Metzli is celebrated, an occasion to give thanks to the thriving and invisible worlds which are hidden from the sun. Ako Castuera is one of the artists invited to present in the Wanlass classroom by Candice Lin. Lin invited Castuera as an extension of the collaborative teaching methodology of the Wanlass residency.

View photos from the exhibition opening reception on Flickr. 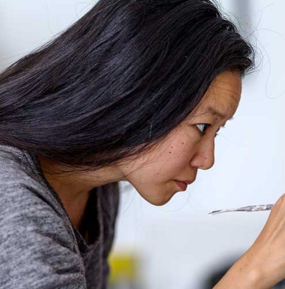 Candice Lin is an interdisciplinary artist who works with installation, drawing, video, and living materials and processes, such as mold, mushrooms, bacteria, fermentation, and stains. She received her MFA in New Genres at the San Francisco art Institute in 2004 and her double BA in Visual Arts and Art Semiotics at Brown University in 2001. Lin’s recent solo exhibitions were at Portikus, Frankfurt; Bétonsalon, Paris; and Gasworks, London, with upcoming solo exhibitions at the Reva and David Logan Center for the Arts, Chicago and Ghebaly Gallery, Los Angeles. 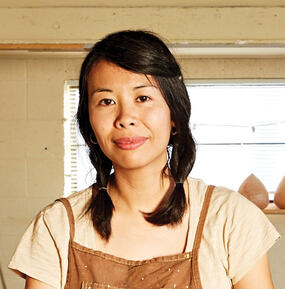 Ako Castuera's sculptures combine animal, human, landscape and architectural elements suggesting an interwoven profusion of life that calls into question the hierarchies we apply to human, non-human, animate and inanimate subjects. The hybrid forms in her work suggest a world of fluid borders in which intangible connections between living or dead entities, place, self and other are expressed in the material language of clay, fiber, and mixed media.A Southern California native also known for her work as a storyboard artist and writer on animated television shows such as, ‘Adventure Time’, Ako has sustained a concurrent independent art practice, exhibiting in galleries and museums throughout the United States.